This method is derived from the Method of diagonals, where numbers are left in their natural order on diagonals, but all other numbers are replaced by their complements.

Generally speaking, by marking the diagonals, the square is divided into nine different areas, which are filled identical. This principle is also used in higher orders n = 4k, where you have to enlarge the areas accordingly. 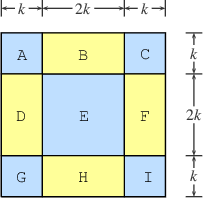 With this basic principle, the areas from the figure on the left are obtained for a square of order n=8. First, you have to create a square in the natural order. As mentioned, the numbers in blocks A, C, E, G and I are kept in their natural order, while the numbers in all other blocks will be replaced by their complements.