Let's take a closer look at the algorithm for order n=5. At the beginning, we write the number 1 in the center cell of the top row and make the first four knight moves.

Now the 5 is entered and after a further knight move for the number 6 will determine a cell, which is already occupied by the number 1. At this point, the specified move sequence must be interrupted with a special intermediate move, simply by moving down four rows from the last occupied cell. 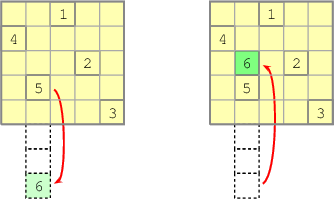 You can continue with these moves until the entire square is filled with the numbers 1, 2, 3, … , n2. The resulting magic square in this case is a pandiagonal magic square.