As with the 9-block method for double-even orders, the square is divided into nine blocks, which are separated by a column or row. 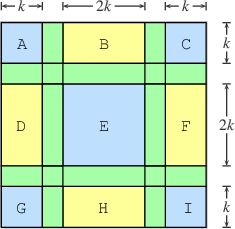 First, the numbers are written in their natural order, where the numbers in blocks B, D, F and H are replaced by their complements.

The numbers in the rows and columns highlighted in green are specially processed so that they are shown specifically in the following right figure. Four individual cells lie on the diagonals and are fixed and no longer changed. All other numbers in these columns and rows are now swapped according to a fixed pattern.

First, take the two marked columns and start with the following steps:

Then the two marked rows are changed.

Finally, some of the nine blocks have to be changed.

If you now enter the remaining numbers, you get a single-even magic square of size n=6.

This algorithm is difficult to implement due to the special mix-ups. Nevertheless, it can be applied to any single-even order. The following figure shows a square of order 10, which was generated with this algorithm. All intermediate steps are described and shown in my PDF book.