Let's have a look at Lo-Shu, the famous magic square of 3rd order.

Of course other magic squares of third order except the Lo-Shu exist. So for example the square shown in the illustration is a magic square.

But who has a closer look at it will see that there is a connection between those two squares, because the second square can be created by reflecting the Lo-Shu at it's center row. By this reflection it immediately gets clear that the magic quality is preserved. The other axis could also be reflected. In every case we get a magic square, as it can be seen in the illustration. The reflecting axis is specially marked.

As those reflections create four other magic squares, we are subject to the temptation of finding more reflection axis. So of course we immediatelly see the top and bottom side as well as the left and right sides of the square.

However, it proves that with those reflections no new magic squares are created. All results can also be obtained by reflections at the inner axis.

Other things happen if we rotate the Lo-Shu. Rotation by 90°, 180° or 270° result in three other magic squares of third order, while rotating by 360° of course results in the initial square.

It suggests itself to continue these considerations consequently and combine the mentioned reflections and rotations, so to perform them one after another. The table shows the results, when the Lo-Shu is reflected at one of the inner axis and then rotated. 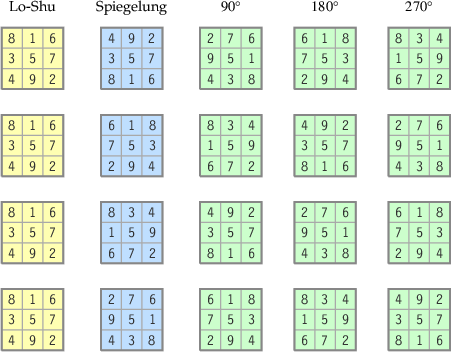 The results make it clear that no new magic squares are generated. Furthermore it is interesting that all results lie inside those squares generated by reflection. This group of only four different results can't be quit by further rotations.

It's a similar situation if at first a rotation and then any reflection is performed. Here it also proves that no other magic squares can be generated. Not very surprising that we only get four different magic squares altogether here. 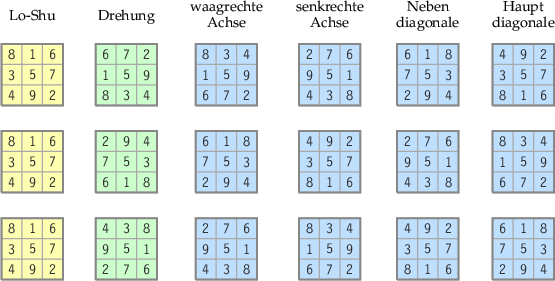 However we combine the rotations and reflections, we never get more than eight different magic squares. In mathematics this is called a closed transformation group.

This means that, when we count the magic squares, we have to look exactly if the given numbers count the symmetries or not.