In the passing centuries, a lot of qualified and unqualified mathematicians devoted their attention to the creation of magic squares. So it is not surprising that the definitions of magic squares were specialized more and more by increasing the conditions for them. One of the most important extensions deals with pandiagonal squares. Sometimes these are called panmagic, perfect or even diabolical, too.

These are magic squares where the sum of all row-elements along a broken diagonal is equal to the magic constant. The broken diagonals are meant to be those that end on the one side of the square and continue on the opposite side.

The background of these broken diagonals can be recognized in the illustration. If we extend the magic square to a carpet, we can see that the numbers 23 and 19 complete the diagonal to a complete row of five numbers.

Surely the broken rows can be arranged in a descending order, as shown in the illustration, too. Here the broken diagonal stands again in place for a diagonal arrangement of five numbers, which are transformed into the area of the magic square.

A magic square of the fifth order consists of nine ascending diagonals, which can be seen in the illustration. Let us take out the main-diagonal, because this one fits into the square without breaking it up. This results in eight broken and ascending diagonals, which are depicted in different colors in the illustration. Corresponding to this, there are also eight descending broken diagonals.

But it gets even better: every sequence of five numbers, starting from any field of the magic square, sums up to the magic constant. The illustration shows all possible sequences that start from cell (8,8). It is easy to see that each of the eight sequences sums up to the number 65. 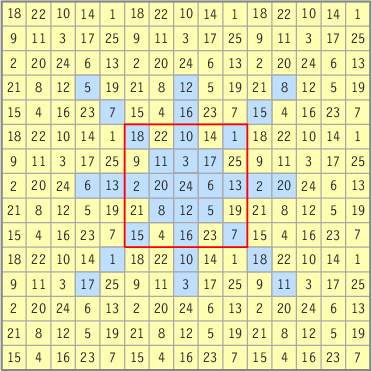